When performing analysis, very often some of the variables need to be recoded. Such recodings would include reversing the values, collapsing several categories into one, or even setting some of the values to missing. The analysis which would require this most often is probably the binary logistic regression because this type of analysis requires a dichotomous (i.e. binary) dependent variable and not many of the variables in the databases are as such. This is why this functionality becomes very useful. The recoding can be done for an individual variable or multiple variables with the same structure at once. The recoding functionality can also take care for the user-defined missing values in a rather flexible way. The recoding functionality has many warnings along the way to prevent the analyst from mistakes. We would recommend to always recode the variables into new ones instead of overwriting the existing ones. This way the original variables will always be available if some other analyses need to use them.

Prior to recoding the variables of interest, it worth checking their properties by viewing their dictionaries. This can be very helpful to get an idea of what the variables are and prevent from mistakes.

The recoding function and its arguments

The lsa.recode.vars function has the following arguments:

In the examples that follow we will merge a new data file (see how to merge files here) with student and school principal data from PIRLS 2016 (Australia and Slovenia), taking all variables from both file types:

As a start, let’s reverse the student responses on how often they feel tired at school. So, let’s use the ASBG07A. It would be a good idea to see the variable dictionary for this variable. To do so, execute the following syntax in RStudio:

The call to this syntax will return the following output in the console:

The variable is a factor (i.e. categorical variable) with “Every day”, “Almost every day”, “Sometimes”, and “Never” as valid values. There is one more value as well,  “Omitted or invalid”. The output from above shows are that it is a user-defined missing value. Let’s reverse the variable, so that the response categories become “Never”, “Sometimes”, “Almost every day”, and “Every day”. We will keep the user-defined missing value (“Omitted or invalid”) as it is, it will also remain as the last category:

After we execute the syntax from above, the recodings will be done, saved in a new variable (ASBG07AREC), the missing values will be assigned to an attribute of the new variable, and the file will be saved, overwriting the original file. The following output will be returned in the console:

The table printed in the console gives you information what was done, you should inspect it carefully. On the left side (source) are the original categories and their frequencies of the variable we recoded. On the right side (new) are the categories of the new, recoded, variable and their frequencies. Check carefully if the labels and the frequencies on both sides correspond, this is important for the results of your analyses involving this variable.

Let’s now collapse the categories of multiple variables at once. Please note that when recoding multiple variables at once, they all have to be of the same class (factor, numeric, or character), same levels/unique values, and user-defined missings (if any). If any of these conditions is not met, the function will stop with an error message. In the example that follows, we will recode four variables ASBG11A, ASBG11B, ASBG11C, and ASBG11D. The variables contain the data from the student responses on how long they do certain activities per day – playing computer games, watching videos, chatting or use internet, respectively. The variables are factors and their categories are as follows:

The last category is a user-defined missing value. Let’s collapse the valid response categories for this variable to two:

The syntax for this is as follows:

As with the previous example, a diagnostic output will be printed in the RStudio console. Inspect it carefully, the success of the recodings will be important for your analysis later.

For the examples that follow, merge a new file with PIRLS 2016 data for Australia and Slovenia (Slovenia, not Slovakia) taking all student and school principal variables. See how to merge data files here. You can name the merged file PIRLS_2016_ACG_ASG_merged.RData.

When done merging the data, select Data preparation > Recode variables from the menu on the left. When navigated to the Recode variables in the GUI, click on the Choose data file button. Navigate to the folder containing the merged PIRLS_2016_ACG_ASG_merged.RData file, select it and click the Select button. 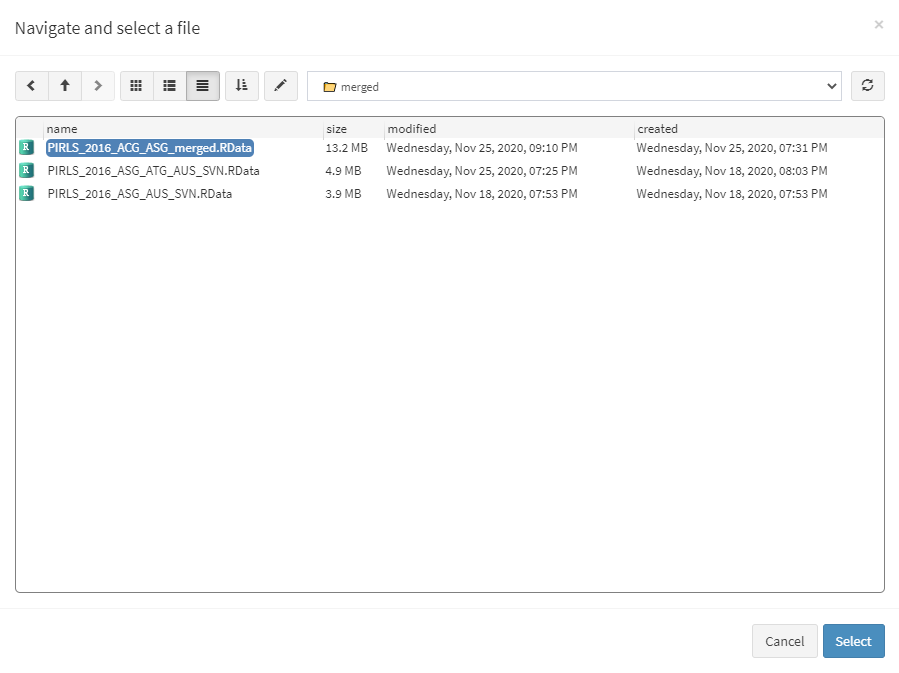 Once the file is loaded, you will see the two panels with the available variables and selected variables (the latter is currently empty): 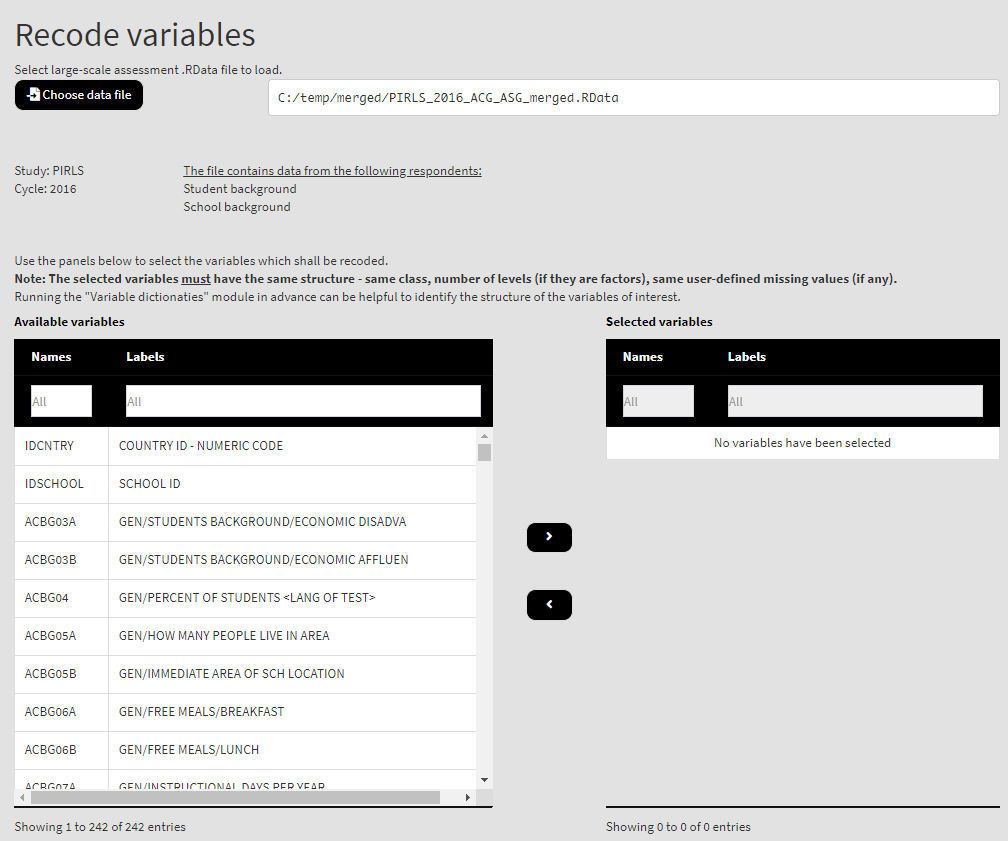 Use the mouse to select individual variables and the single arrow buttons to move them from the list of available variables to the list of selected variables and vice versa. You can use the filter boxes on the top of the panels to find the needed variables quickly.  Note that the selected variables must have the same structure – class, number of levels/unique values, labels (if any) and user-defined missing values (if any). If any of these conditions is not met, the GUI will not let you continue any further and warnings will be displayed. As a start, let’s reverse the student responses on how often they feel tired at school. So, let’s use the ASBG07 (it worth viewing the dictionary for this variable first, you can see how to do this here). Find the variable in the list of available variables on the right (you can use the filter at the top) and move it to the list of the selected variables. It would be a good idea to see the variable dictionary for this variable. Once there are any variables in the Selected variables panel, the following elements will appear:

Read the notes at the top, these are important considerations for the further steps you need to take. To define the old and new values, type them in the New levels column in the table above. Note that while defining the recoding instruction the GUI will show you different warning messages in red above the table. Make sure you read them, they are important. Not each of them may represent an error, some just warn you that a specific action will be taken. If you like that the variable stays a factor and has labels, enter the new labels in the corresponding column. If you omit them, the recoded variable will be turned into numeric. In addition, the user-defined missing category in the table (“Omitted or invalid”) will be defined again as the last category (5). If omitted, it will be recoded to NA. The settings will look like this:

Underneath you will see the checkbox Recode into new variables. It will be selected by default, meaning that the recoded values will be saved into a new variable. Otherwise, the original variable will be overwritten. We would strongly advise you to leave it checked and save the recodings into a new variable. In the tables below add the new variable names and their labels. Once the new variable name is entered, the Define recoded output file name will appear. Click on it, navigate to the folder where the source file is located, click on it and confirm it will be overwritten. When you do so, the syntax to be executed and the Execute syntax button will appear. The final settings for this section will look like this: 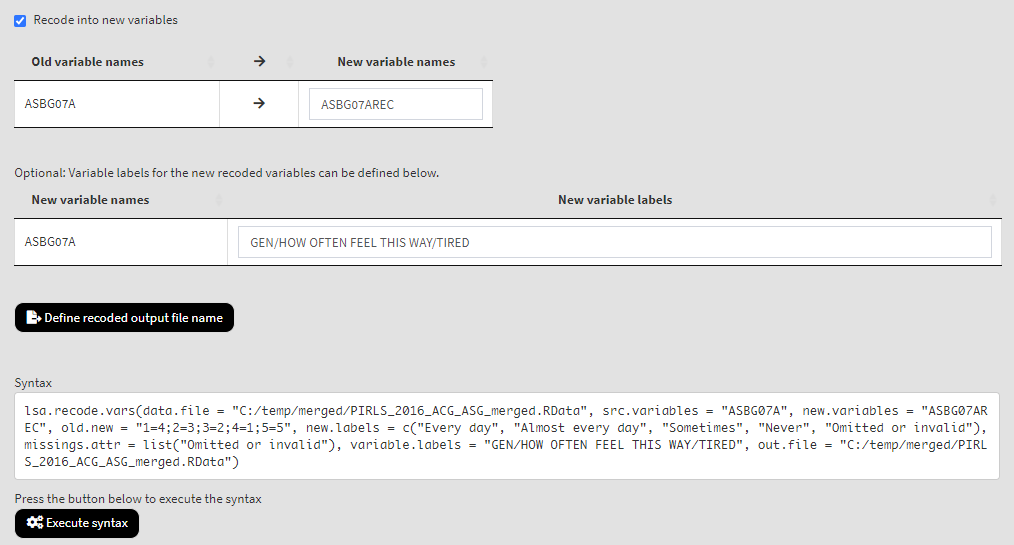 Click on the Execute syntax button. The GUI console will appear at the bottom and will log all completed operations:

Revise the old (source) and new values from above carefully to make sure that all recodings were done as intended.

Let’s now collapse the categories of multiple variables at once. Please note that when recoding multiple variables at once, they all have to be of the same class (factor, numeric, or character), same levels/unique values, and user-defined missings (if any). If any of these conditions is not met, the function will stop with an error message. In the example that follows, we will recode four variables ASBG11A, ASBG11B, ASBG11C, and ASBG11D. The variables contain the data from the student responses on how long they do certain activities per day – playing computer games, watching videos, chatting or use internet, respectively. All variables have the same structure – all are factors and their categories are as follows:

The last category is a user-defined missing value. Let’s collapse the valid response categories for this variable to two: 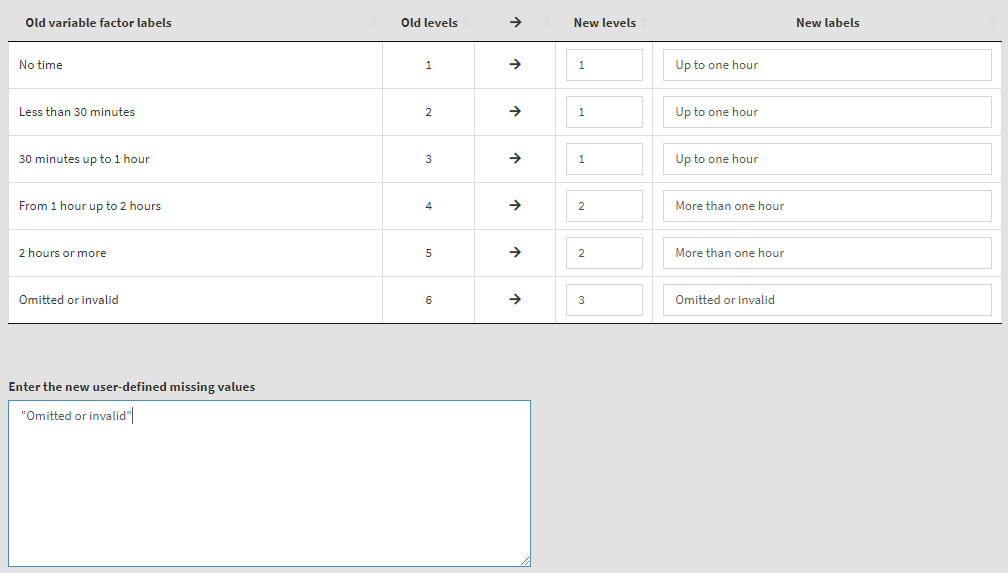 Now we have more than one variable to recode and for each of the old (source) variables we have to define the names for the new variables they will be recoded into, as well as their labels: 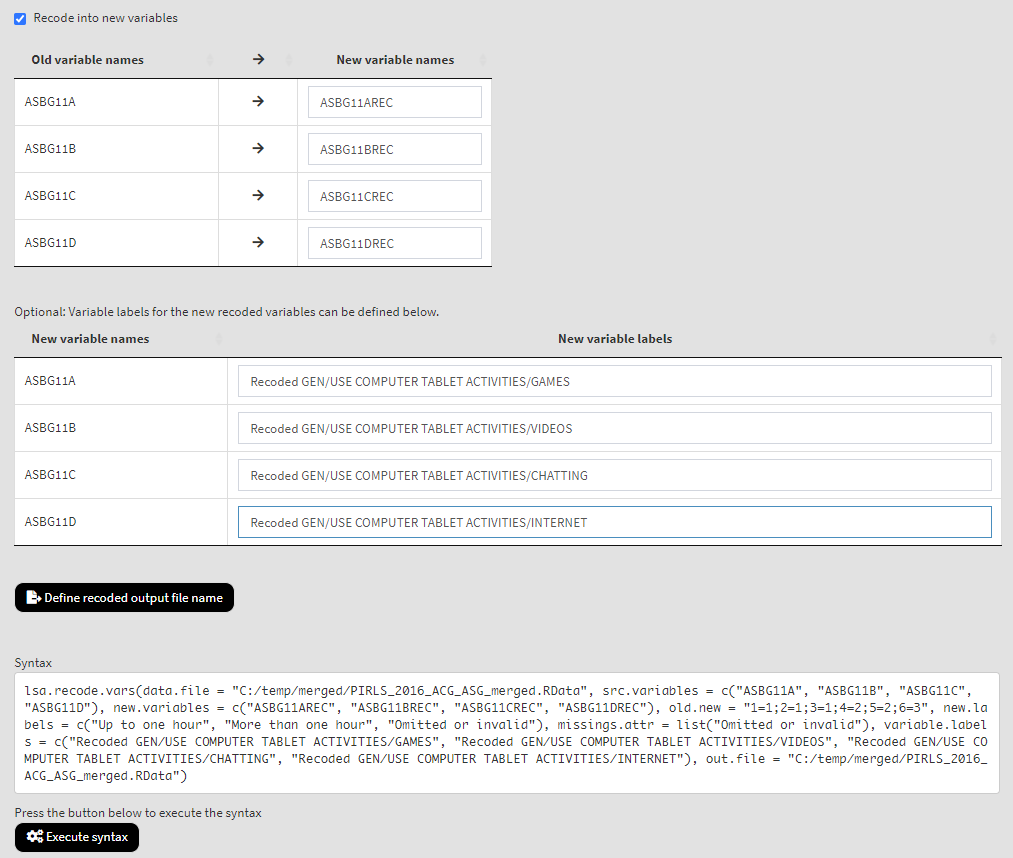 If you need to, change the output file name clicking on the Define recoded output file name button. Click on the Execute syntax button. The execution will start, the console will be displayed at the bottom of the GUI. You will see a message letting you know when all operations are done. This time the console has much more output to show. Scroll down and check if all recodings were done as intended.