Data from large-scale assessments are provided in SPSS, SAS and TXT (in case of PISA prior its 2015 cycle) file formats (to obtain the files, see the links here). Various contributed R packages which import SPSS and SAS file formats, like foreign and haven, for example. Different functions in the initially loaded in R packages can read TXT delimited files, like read.delim, read.delim2 from the urils package, or functions in other contributed packages like readr or data.table, for example. However, all of these available functions have different implementation of the methods used to import data and the type of object resulting from the import, and this matters for the further computations (data preparation or analysis). It is, thus, difficult to predict how a user will import the data and what the result will be. In addition, it is much more convenient to have the data in native .RData format with a standardized structure to operate on. This is why this function to convert the data in .RData format is needed.

The lsa.convert.data function converts the data from SPSS file formats from IEA studies and PISA (2015 and later cycles) and TXT (in case of PISA prior its 2015 cycle) file formats into .RData files. In doing so, it adds some properties to the objects stored in these files, so that other functions (data preparation or analysis) in RALSA know what to do further with it when passed to them.

The data conversion function and its arguments

The lsa.convert.data function has the following arguments:

The lsa.convert.data converts SPSS data into native .RData format from the following studies:

There is a difference between PISA (2015 and later cycles) and the rest of the studies (IEA-like) in the list above. All except PISA provide the files per cycle, country, and respondent type (e.g. school principal, teacher, student, or parent). For example, these are the SPSS files for Slovenia from PIRLS 2016 (to see the file and variable naming conventions, and the description of the data base files, please refer to Chapter 4 of the PIRLS 2016 User Guide):

This division in separate files makes it very convenient to operate with the files and merge custom data sets for the analysis, i.e. merging only countries and respondent types needed.

It is important to note that the file types and their naming differ from one PISA cycle to another. However, the lsa.convert.data function can handle these differences out of the box and automatically recognize the study name and the data files’ properties to convert them successfully.

As an example, we will convert PIRLS 2016 data. In RStudio execute the following syntax:

This will convert the PIRLS 2016 data for Australia and Slovenia (Slovenia, not Slovakia!). It will take all files available for these two countries in the inp.folder for that cycle and will store them under the out.folder. If the inp.folder folder contains data from more than one study and/or cycle or more than one population, the function will stop with an error. If the out.folder is the same as inp.folder, the function will convert the data anyway, but will display a warning at the end. These two are intentional – to keep the folders and the file structure clean and tidy, always have the SPSS data from one study/cycle/population only stored in a folder, and always choose a folder for the converted .RData files that is different from the source SPSS files.

Note that the execution time will depend on the number of files per respondent type in the data base, the size of individual file types and the number of countries. However, with the IEA-like data bases, the conversion process goes rather quick. For example, converting the entire PIRLS 2016 data base (the main PIRLS, not ePIRLS or prePIRLS) has data from 57 countries (seven files per country), and takes about 11 minutes to convert. If you don’t need to convert the data from all countries, but just the ones you will need in your analyses, use the ISO argument as shown above.

What about the SPSS files from PISA 2015 and later cycles? The routine is the same. However, as mentioned in the beginning, the SPSS files for a PISA cycle are provided for all countries within a file type. As a consequence, you will not be able to convert data from these data bases for individual countries, but whole files. If you try to pass the ISO argument to the call, it will be ignored. The syntax will look like this:

Messages similar to the previous conversion of PIRLS 2016 data base will be printed to the console as well. Note that because the individual files have a rather complex structure, they contain data from all countries and a large number of variables, the conversion of PISA SPSS files can take really long time. The entire PISA 2015 data base, for example takes around 5.5 hours on a computer with Intel Core i7-7500U CPU and 16GB of RAM. This can be rather frustrating. You can leave the computer work on this over night and have the converted data files in the morning. 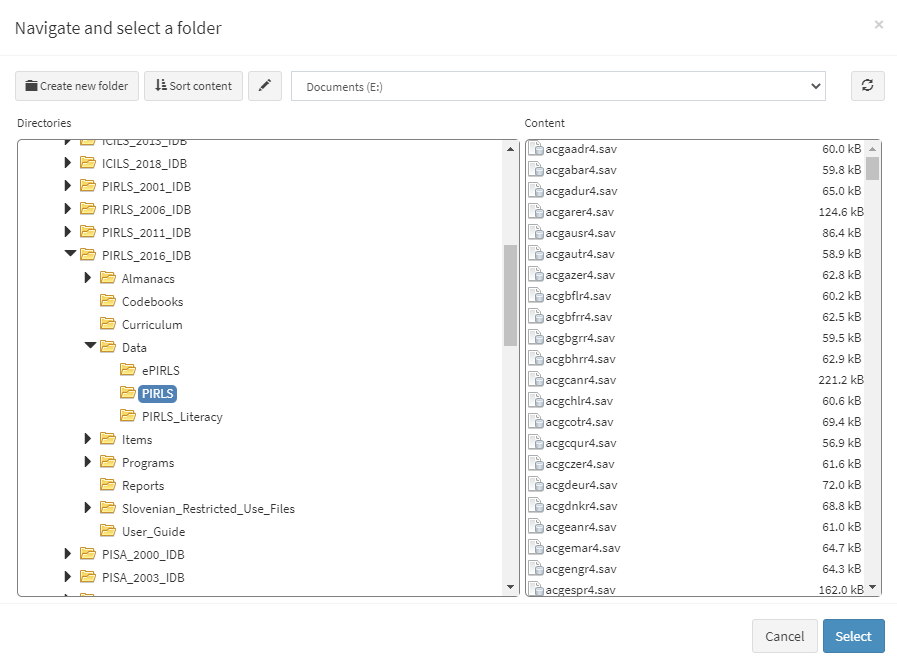 After you confirm by pressing Select, you will see the following screen: 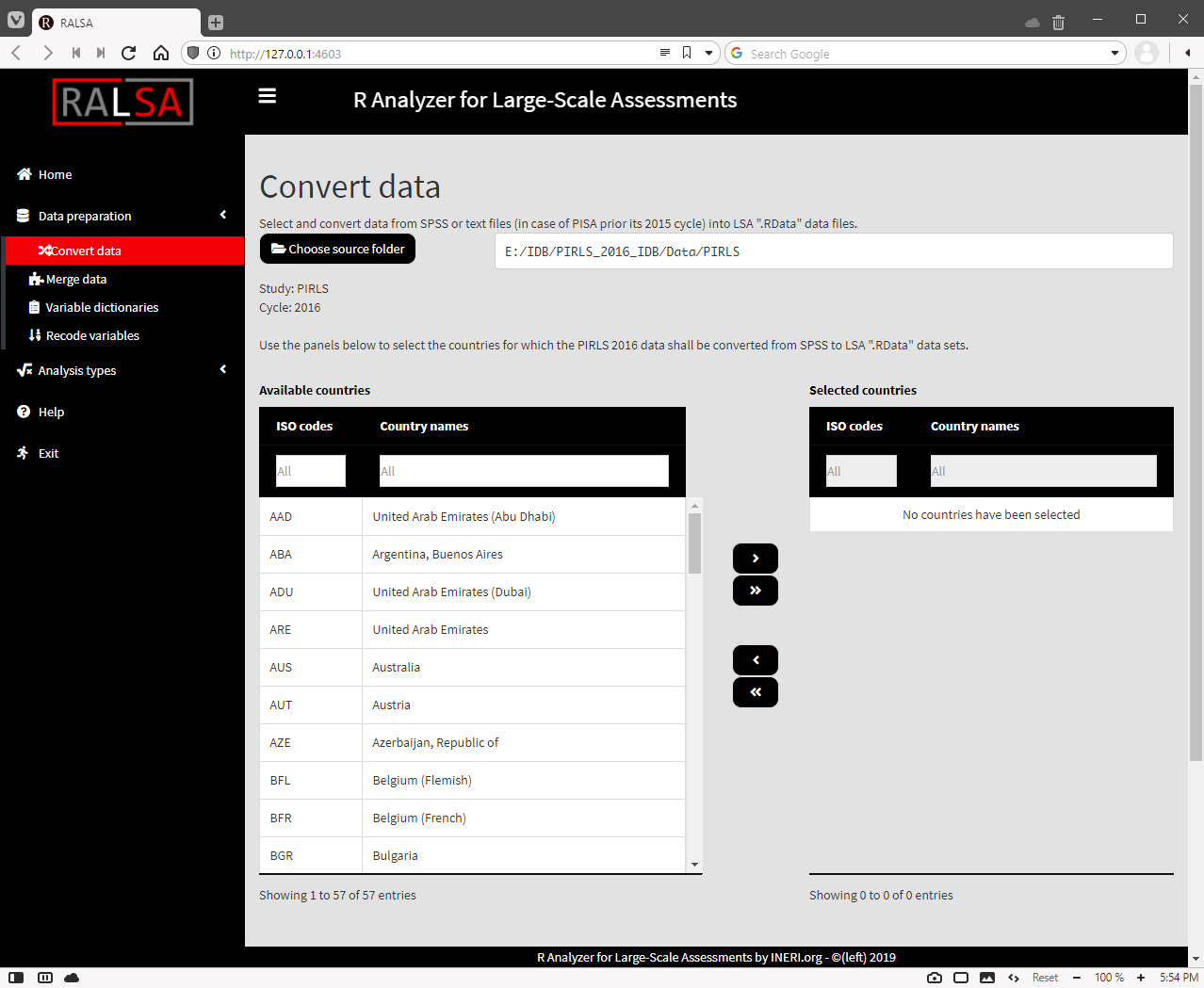 Use the mouse to select and the single and double arrow buttons to move the countries between the lists of Available countries and Selected countries. The single arrow buttons can be used to select and move individual countries between the two panels. The double arrow buttons can be used to move all countries between the two panels, even if none of them are selected. Lets select Australia and Slovenia (again, Slovenia, not Slovakia!). A checkbox and a button will appear underneath. Check the Convert user-defined missings to NA if you want all the SPSS user-defined missing values to be converted to the only supported by R missing value. Otherwise, leave it blank (default), then the SPSS user-defined missing values will be assigned in additional attribute to the variables, later they can be used, if needed. However, if you don’t feel like you will need them, just check the box. Click on the Choose destination folder button and using the folder choose dialog navigate to the folder where you want to save the converted files. After you confirm, the file path to the destination folder, the command syntax field and the syntax execution field will appear at the bottom of the screen: 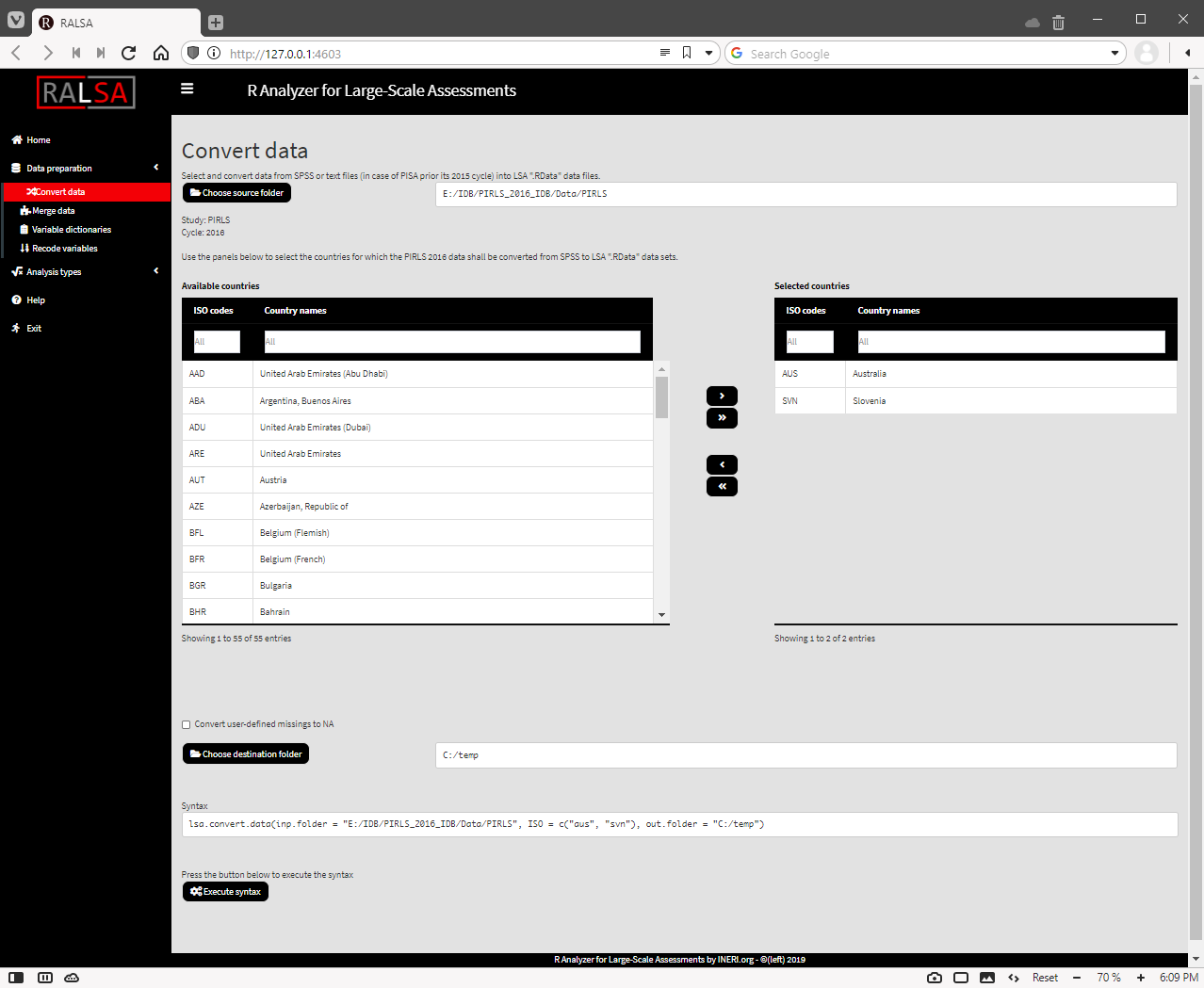 Press the Execute syntax button. A pop-up message will notify you that the file conversion started. A continuously updated console will appear at the bottom of the screen, showing the ongoing operations:

Scroll down if you don’t see it. When all operations are finished, a pop-up message will be shown on the screen notifying you about it.

To convert SPSS files from PISA 2015 and later cycles, follow the exact same steps from above. You won’t be able to select countries or individual files for reasons explained in the previous section. The interface will just show a table with all files available in the folder, the Convert user-defined missings to NA checkbox and the Execute syntax button: 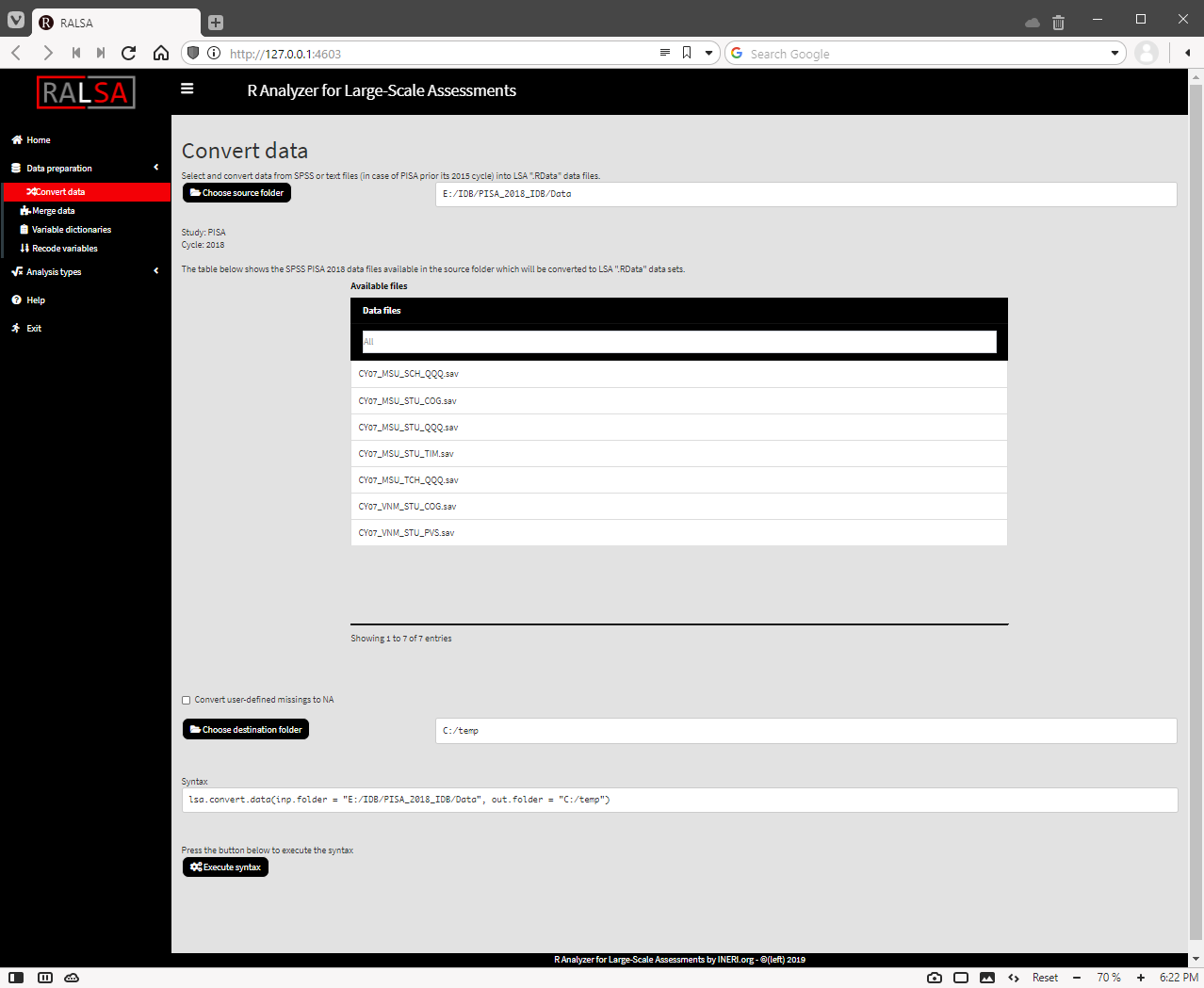 Click on the Execute syntax button. The conversion can take rather long time due to the PISA large file sizes.

As noted earlier, this option applies only for PISA data prior its 2015 cycle (2000, 2003, 2006, 2009, 2012). These data were provided in TXT files plus SPSS and SAS control syntaxes to import them into SPSS or SAS respectively and save them in their file formats. The lsa.convert.data function uses the TXT files and the corresponding SPSS syntaxes to convert the data into native .RData format. It is important to note that you should download the TXT files and their corresponding SPSS syntaxes from the OECD website (see the link to it here), unpack them from the ZIP files and place them in the same folder without changing them (no changes in the file names or their content). Here we will give examples with the PISA 2012 data.

The routine for converting the PISA data from cycles prior to 2015 is the same as for the SPSS files. The only difference is that you would need to add explicitly PISApre15 = TRUE to the call arguments, so that the function shall look for TXT and SPS control syntaxes. Here is an example:

As with the SPSS files, when converting the TXT files the function will print messages on screen when the conversion of a given file is done. If the function finds SPSS syntaxes and TXT files without corresponding counterparts, it will convert the rest for which pairs are found and will drop a warning when done. The converted files will be located under the out.folder.

The routine for converting TXT files using the GUI is the same as for converting PISA 2015 and later SPSS files. Select Data preparation > Convert data from the menu on the left. When navigated to the Convert data section in the GUI, click on the Choose source folder. You won’t be able to select countries or individual files for reasons explained in the previous section. The interface will just show a table with all files TXT and their corresponding control SPSS files available in the folder, the Convert user-defined missings to NA checkbox and the Execute syntax button: 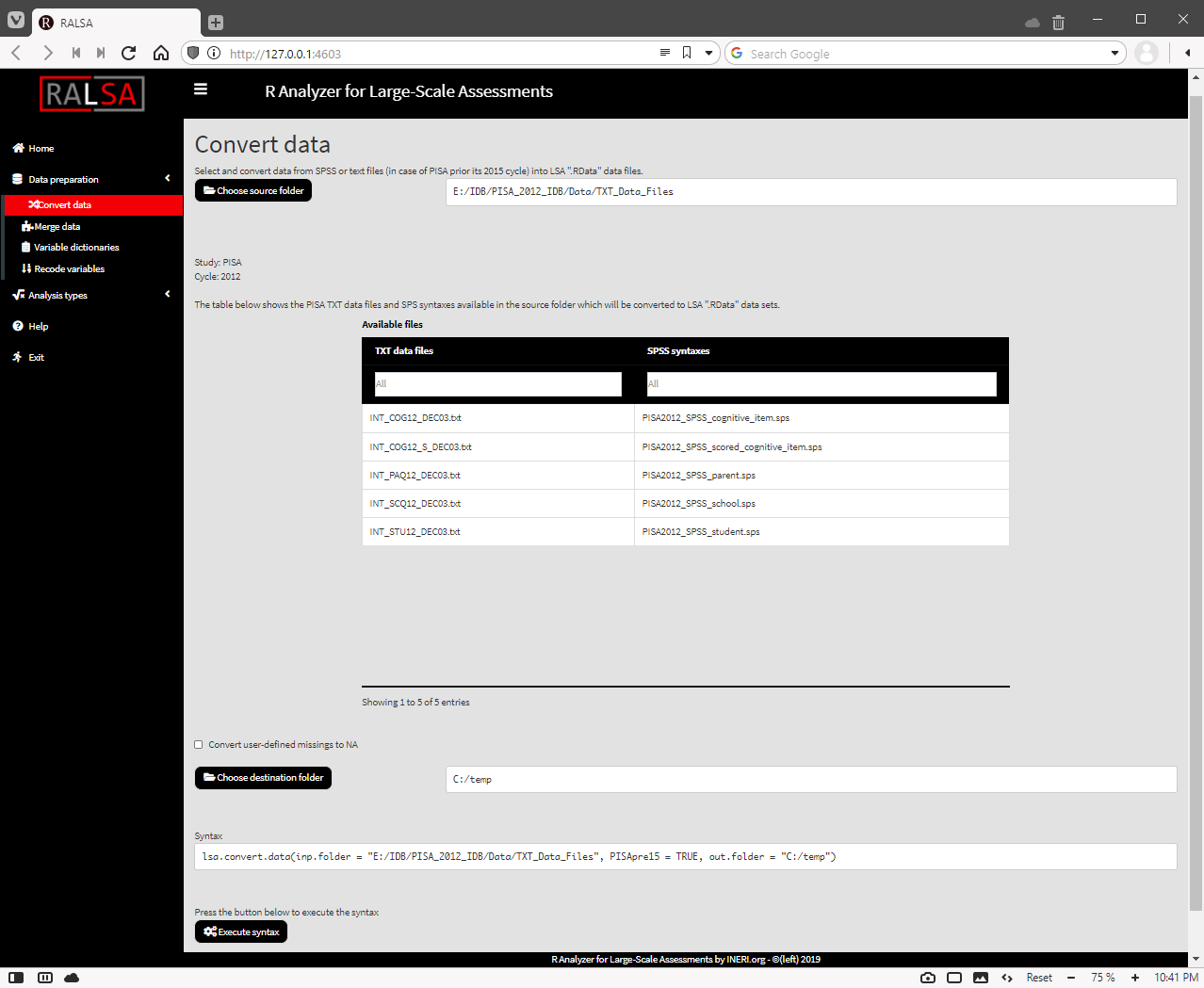 Press the Execute syntax button. The syntax will be executed and all the operations will be displayed in the console window at the bottom of the screen. It will be updated on every step. Note that the TXT files for PISA prior its 2015 cycle are rather large because they contain data from all countries together for every file type and the conversion can take quite long time.